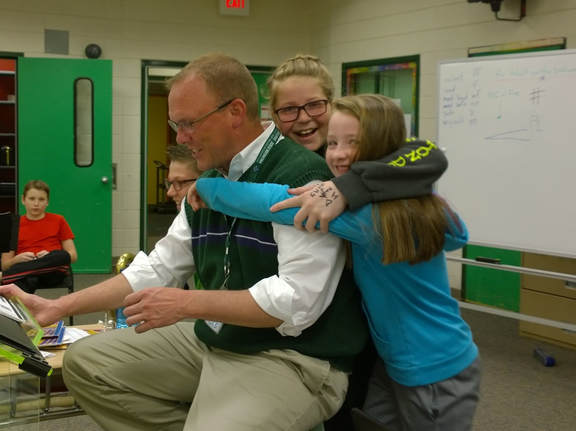 Michael Osborn has been director of Maltby Middle School and then Maltby Intermediate School Bands since 1992. During that time he has also been one of the directors of the Brighton High School Marching 200+.   He is a proud Spartan (Go Green!) and holds a Bachelor  of Music Degree (BM) in Instrumental Music Education (with honor) from Michigan State University (1992), and a Master of Music Education Degree (MM) also from Michigan State University (1999).

Mr. Osborn was raised in the Temperance, MI area and attended the Bedford Public Schools.  During his k-12 education Mr. Osborn was highly involved in the band, (Symphony Band, Marching Band, and Pep Band;  choir ( Soiree Singers -show choir/the top auditioned choir)  and foreign language programs (French 4 yrs and German 3 yrs.).  He started in band on clarinet in 5th grade, quickly shifted to Bass Clarinet early in 7th grade and then learned tuba for the high school marching band while still playing bass clarinet in the concert bands.  His senior year he switched, at the director's request, to be principal tuba in the Bedford High School Symphony Band (the top ensemble at Bedford HS) while also performing in multiple honor bands on bass clarinet.

As a student at Michigan State Mr. Osborn was also very involved in the University Band Department as well as the School of Music.  He participated in the Spartan Marching Band, Spartan Brass Pep Band, Concert and Repertory Band.  In the Spartan Marching Band he served as a Tuba Squad Leader (3 years), Tuba Section Leader (2 years), Band Vice President and Band President.  He also served on the School of Music Student Advisory Committee and was a campus tour guide for the Student Alumni Foundation.

Mr. Osborn has also been continually involved in his Fraternity, Kappa Kappa Psi, National Honorary Band Fraternity (www.kkpsi.org).  As a student he served in many leadership positions including chapter and district president.  As an alum he became involved in the National Leadership of the fraternity serving in a variety of positions including National President (2003-2005), and Chair of the Board of Trustees (2009-2011 ) .  Since retiring from the National Leadership in 2015 he continues to serve as the Zeta Epsilon Chapter Sponsor at MSU.

Outside of band activities Mr. Osborn is the Manager of the Osborn Family Farm LLC which is a working vegetable farm in Temperance, MI.  It is the farm on which he and his two brothers grew up.  While farming is far from a passion for Mr. Osborn (hence the professional degree and job not in Temperance) it is a way to honor his family's legacy of farming.  Mr. Osborn and his Brothers are the 5th or 6th generation of the family to sell produce at the Toledo Farmers Market.  When he gets a chance Mr. Osborn enjoys history, travel, French and German (skills neglected since declaring a music ed major in undergrad :(  )   Reading is also fun when he can actually sit in a chair with nothing else to do and not fall asleep!  He has also been working on his family history, something he started doing back in high school and restarted a couple years ago.